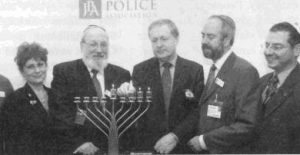 Jewish Police Association members celebrated the festival of Chanukah (Festival of light) at New Scotland Yard. Deputy Commissioner Sir Ian Blair was among the guests and lit a candle on the menorah (candelabra, above). Rabbis Alan Plancey, of Borehamwood Synagogue, and Jonathan Romain, of Maidenhead Synagogue, were also there.

He said: “It went very well. We had traditional klezmer music and some group dancing where the audience took part.”

The festival of Chanukah starts on the 25th day of Kislev, which falls in November or December of the western calendar, and lasts for eight days.

On the first day one candle on the menorah is lit and every day an extra candle is lit until they are all alight on the eighth day.

Reproduced with kind permission of “The Job”