(Circa £28k inclusive of London weighting and allowances)

Today’s policing challenges are more complex than ever. It’s critical that the Met’s workforce understands and reflects the diversity of individuals across London’s communities. As a result, the Met must continue to recruit the right people from every background.

Few careers offer the chance to improve the lives of 8.3 million people. But then few organisations are as rewarding as the Metropolitan Police Service.

People who enjoy the challenge of never knowing what each day will bring. People who want opportunity and excitement. People who can engage with communities and build positive relationships with all kinds of individuals. People like you.

With this incredible breadth of skills, knowledge and experience we can make London safer for everybody.

To receive an application form in October, register your interest in applying today by calling 03300 227 899. If you would like the support of the Jewish Police Association please contact us on 07770 492 782.

When the Met invite’s applications in October, the organisation will allow candidates to apply without having the Certificate in Knowledge of Policing (CKP). However, it is important that candidates who apply in this campaign, still book onto and complete a CKP course, as successful applicants will be required to have attained the qualification by the end of February 2014.

VOLUNTEER AS A POLICE OFFICER

The Metropolitan Police Service supports and respects all of London’s diverse communities. It goes out of its way to encourage people from all backgrounds to volunteer their time as special constables, and will make every effort to enable you to give something back to your community.

The Jewish Police Association (JPA) provides a solid network of support and advice to our Jewish colleagues. What’s more, the kippa is authorised by the Met’s dress code and, in terms of keeping kosher, it’s possible to bring your own food or, with notice we can arrange for kosher food to be made available.

It’s the JPA’s vision to have a special constable from every synagogue in London. If you’d like to be one of them, please contact the JPA on 07770 492 782 or, to apply online, visit www.metpolicecareers.co.uk/specials quoting reference 205/11.

Be a highly trained special constable. Be there for London. 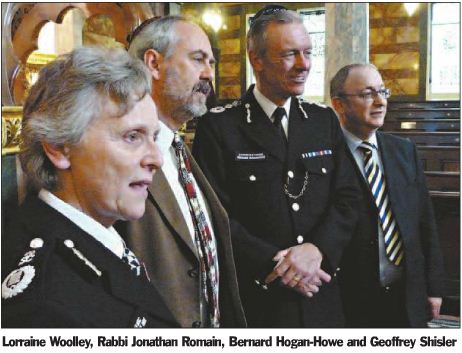 Britain’s top policeman this week urged community members to consider a career in the force as a major campaign was launched to recruit a volunteer constable from every synagogue in London.

The Jewish Police Association – which has 200 members in the capital – will in the coming weeks contact shuls and schools as part of efforts to boost intake from a community it describes as “one of the most under-represented” in London’s force.

Speaking at the launch at New West End Synagogue, Metropolitan Police Commissioner Bernard Hogan-Howe said: “Our ambition is to be the best. We’ll only manage that if we maximise all our talents and represent the London we know and love. It’s one of the world’s great cities and the more diverse our workforce the more we will have the support of the people we provide a service for. I would encourage people from the Jewish community to think of the police as a great career. It’s a great opportunity to influence the lives of others for the good.”

With currently only limited recruitment of full-time paid officers, the campaign is focused on recruiting special constables, who give at least 200 hours of service a year on a voluntary basis. However, JPA chair Mat Shaer stressed that becoming a special was one of the main routes to becoming a regular officer. “Specials also have the same powers, equipment and training and undertake, by and large, the same roles of all regular officers. There are traffic special officers, public order special officers, everything you can imagine special officers are now able to do”. He added: “Bearing in mind the Jewish community is one of the most under-represented in the Met police, it’s incumbent on us to try to redress it. Historically, when a young person is coming to that crunch time of making a choice about a career, the police service doesn’t necessarily appear on their radar. I think it’s about selling the excitement of the role. Looking back on my service, I’ve been involved in everything from investigating murders to dealing with serious incidents to helping people who have a crisis in their lives. I never know what’s going to present itself on a day-to-day basis and that challenge will excite a lot of people”.

One of the youngest Inspectors in the Met is 29-year-old Michael Loebenberg who first joined the force as a special while studying at university. “I wanted to do something valuable for the community”, he said: “I found it to be immensely worthwhile; you go home at the end of every day feeling you’ve made a difference. I think there might have been an intake of breath when I told my parents I wanted to join the police but I think more than anything that was because of concern of safety. But my job gives them a lot of nachas and I’ve been able to achieve a lot in a short space of time”.

But it’s not just police work that JPA’s members are involved in. The Met also includes workers from top professions that tend to be associated with the Jewish community, such as doctors and lawyers.

Sara Levene, 58, is a doctor who works as a medical officer as part of the Met’s recruitment team. The Kinloss board member said: “The Met has been a brilliant employer. If I need time off for Yom Tov or on Fridays, I’ve never had any difficulty”.

Lorraine Woolley, who as Chief Officer of the Special Constabulary is one of the most high-profile Jewish figures in the Met, said: “Jewish officers play an important role in their knowledge and understanding of their own culture and in the teaching of this. We have fine examples and I would like to see more Jewish officers in the special constabulary who go on to be regular officers”. She added: “Wouldn’t it be nice if we had a Jewish Commissioner one day?”

Article reproduced with the kind permission of Justin Cohen, on behalf of “The Jewish News”, 3 May 2012

Whilst the Jewish Police Association has launched a London recruitment drive for Special Constables, we would also be delighted to answer queries you have about joining the Police Service elsewhere in the United Kingdom. We have members based in many different forces and can offer both support and advice through both the application process and whilst you serve in your new role. Please contact the JPA on 07770 492 782 or by e-mail for more information.