Police are out in force for HMD events 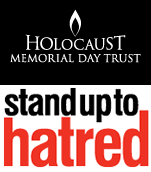 Communities Secretary Hazel Blears told a gathering of senior policemen and community leaders at Western Marble Arch Synagogue of her delight at the wide range of age and backgrounds of those involved in HMD activities.

Organised in conjunction with the Association of Police Authorities, the get-together was the latest arranged by the APA to raise awareness of diversity. Around 90 senior officers took part in a day-long seminar, followed by dinner and a programme of prayer, poetry and song to mark HMD.

Speakers included the chair of the Muslim-Jewish Foundation, Rabbi Herschel Gluck. Among those lighting memorial candles were James Alexander-Abt, 10 and Aimee Buchler, 11, whose families lost relatives in the Shoah.

The Jewish Police Association joined other police groups at New Scotland Yard on Tuesday for a service arranged by the Met’s diversity and citizen focus directorate to symbolise the force’s commitment to stamp out hate crime.

JPA chaplain Rabbi Geoffrey Shisler and the Moriah Jewish Day School choir were among the participants. JPA chair Mat Shaer pointed out that “the theme of ‘Stand up to Hatred’ is one of the core values of a police officer”.