Multi-ethnic Police a Force Against Terror 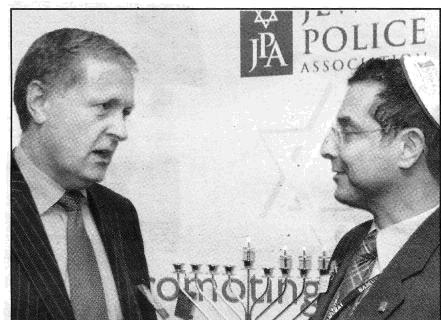 Metropolitan Police Commissioner-elect Sir Ian Blair has told Jewish officers that ethnic minorities working together in the force will help defeat the forces of violence.

Commenting on his own new role, he said: “The challenge is the extraordinarily difficult world we inhabit in the 21st century. The joy is the diversity in this city, celebrating Chanukah with the JPA, Diwali with Hindus and with Christmas just coming up. The city is transforming itself before our eyes with all the world’s great religions represented. It is a city that is defiant against the idea of terrorism because it is comfortable with itself.”

JPA chaplain Rabbi Alan Plancey welcomed Sir Ian, who lit one of the candles. Another chaplain, Rabbi Jonathan Romain, explained the festival’s significance to an audience including representatives of other Met police groups.

Crime-prevention officer and JPA chair Jo Poole said afterwards that the association wanted sponsors, in order to expand its work at exhibitions and events with the aim fo encouraging futher Jewish recruitment.