Life on the beat

Sergeant Michael Loebenberg says that being a Jewish police officer in Stamford Hill has its advantages and challenges.
“It’s obviously not a traditional job for Jewish people,” said the 28-year-old United Synagogue member. “My family were concerned about antisemitism. There is a perception that large bodies like the police service have an element of antisemitism within them but I’ve never experienced it.”
When dealing with a Jewish crime victim, there was “normally a positive response. It can help to demonstrate a level of empathy. I have a better understanding of their needs.” 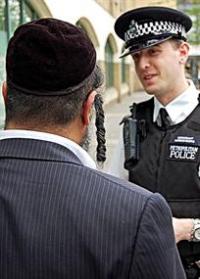 The Jewish Police Association deputy chair moved to Hackney in April 2010 after working in Brent.
“I chose Hackney because it’s a very diverse borough and has its challenges – and I also wanted to work somewhere with a significant Jewish community,” he said. “Building confidence in the community was one of my aims. I wanted to engage where other officers may struggle.”
He ran the Lordship ward Safer Neighbourhood Team in Stamford Hill for five months, moving on to an emergency response unit.
Sgt Loebenberg – who describes himself as “shomrei Shabbat at home” – found that in a close community, “news spread quite quickly about the arrival of a Jewish officer.
“There were some people who expressed concern about the way I handled my Judaism because I work on Shabbat. I believe Jewish officers add value seven days a week in the service we provide to the Jewish community.
“I work in an emergency response unit and believe in an element of pikuach nefesh – breaking Shabbat to save a life.”
He explained that things could be difficult for police officers “who don’t want to work on Shabbat in terms of integrating with teams. Everyone would rather be home with their families on a Saturday so officers find themselves affected by the attitudes of their colleagues.”
Moishe Friedlander, one of five strictly Orthodox representatives on the Hackney police Independent Advisory Group, said it was “very encouraging to know there are Jewish police officers who work in the Met.
“However, within the strictly Orthodox community in Stamford Hill, we have a set up where, if there are any issues on Shabbat or festivals, the police will ask IAG members for advice.”
There are currently 150 members of the JPA and Sgt Loebenberg said numbers were increasing. “There is no reason why there shouldn’t be more Jewish police officers,” he said. “There may be some conflicts for the more observant but there are other roles within the force, such as special constables, which are more compatible.”