Jewish Police Association members braved the cold to hold a food drive outside Tesco in Brent Street, Hendon as part of Mitzvah Day. Shoppers were encouraged to add an extra item to their basket, to be donated for distribution to local people in need. Six bins of food and toiletries were collected, including 50 packets of pasta and 20 tubes of toothpaste. 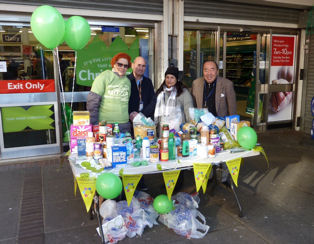 Other officers and staff attended the Association of Jewish Ex Servicemen Remembrance Day to participate at the Parade at the Cenotaph in Whitehall.

“Others at the same time have been commemorating those who have fought and, in many instances, sacrificed themselves for the freedom of others by participating in the Remembrance Day Parade of the Association of Jewish Ex-Servicemen and Women.”