JPA Founder is honoured by Met

A beauty therapist turned police officer has received a Metropolitan Police commendation for ideas she developed to help reduce crime in nightclubs.

Jo Poole, 57, who has spent 17 years on the force, was presented with the award on Monday. “It means a lot to be recognised for your work,” she said.

“I’m most proud of instigating the stickers at cash machines to warn people to look behind them when they take out money. It helped reduce crime in one street in Soho from 167 attacks in six months to nine.” 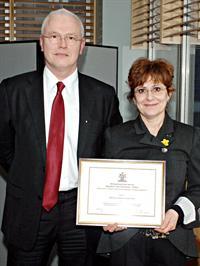 The Northwood and Pinner Liberal congregant – a founding member of the Jewish Police Association – recalled that when a beauty therapist, “I had some police sergeant customers who dealt with domestic cases and I thought it was very interesting.

“I would like to see more Jewish women officers in the Metropolitan Police. I would definitely recommend it to anyone who would like a more interesting and demanding working role.”