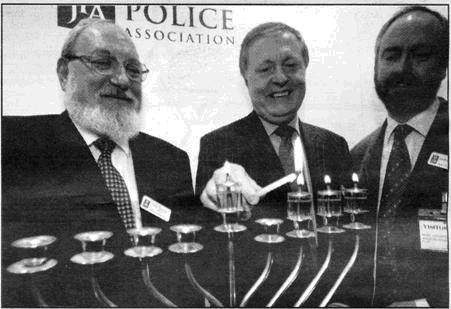 Britain’s incoming top cop has spoken of the challenges facing the country in trying to tackle terrorism.

Blair, 51, who will become commissioner of the Met in the new year, said: “I think the police have to be optimistic. If we aren’t, pessimism and cynicism set in. When I was informed of my appointment, I was full of a sense of challenge and joy in a way that seems like Chanukah to me.”

He said the challenge was to face the realities of the twenty-first century, such as international terror, adding: “Sometimes the world seems like a dark place.

“But we’re in a city defiant in the face of terrorism. We enjoy our own religious faith and respect everybody else’s.”

JPA secretary Danny Phillips said: “I think it’s tremendous the JPA were able to celebrate Chanukah this year at New Scotland Yard with Sir Ian Blair. Sir Ian has shown great support for the JPA and it was wonderful he could find time in his busy schedule to come and celebrate with us.”

Rabbi Plancey said: “Sir Ian Blair’s not the commissioner yet, but already he feels part of the community. I hope it will be a genuine relationship.”

Reproduced with kind permission of the “London Jewish News”